Jos of Seein Red on the Reversal of His Hearing Loss

Jos Houtveen is the bass player of the legendary Dutch hardcore punk bands Seein’ Red and Lärm. In 2011, he had to quit his bands and give up playing music due to serious ear damage due to multiple infections and exposure to noise. Against all the odds, Jos was given the OK to perform again and Seein’ Red returned to the stage at the 2019 Static Shock Weekend in London. I asked Jos to tell us a bit about his experience.

All photos by Michiel de Wilde.

MRR: Most people of a certain age that are into loud music develop some kind of hearing problem. When did you first start to suspect yours were getting bad enough to need treatment?

It was on a flight from Milan to Amsterdam, we had just played a gig with DropDead and more bands and during that flight my ears popped and started to hurt really bad. The day after we got home I went to see my doctor and he referred me to a specialist in the hospital. She rang all alarm bells possible and within a few weeks I got the advice to stop play live music, unless I wanted to lose my hearing completely. At that point I could not hear more than 25% in my right ear.

I would not give them all the credits (haha).

MRR: How many years had you been playing music at this point?

MRR: Did you previously wear ear protection/earplugs when playing music or going to gigs? If so, when did you start? 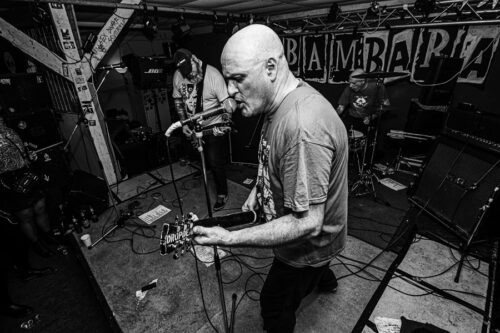 MRR: What did your treatment involve?

I had surgery performed on both ears, they fixed the eardrum on the right side and I had loads of polyps removed from both ears. These polyps caused a lot of infections and since they were removed, the infections have decreased a lot too. My ears still look like the ears of a boxer, though.

MRR: Were you told you had to give up playing immediately, or was that something that you figured out later?

It was something that was told to me later, after the first treatment if I recall correctly.

MRR: Was it hard to break the news to your bandmates? You had played together a long time.

It was very much. We had to cancel Chaos in Tejas on really short notice, which sucked because we were asked to play with both Seein’ Red and Lärm.

MRR: When did you play the “farewell” gigs with your bands Lärm and Seein’ Red?

Both of them happened in 2012, first Seein’ Red and next Lärm. The Seein’ Red gig was amazing, with Citizens Patrol, Harda Tider and Heratys. The venue was packed and sold out in 15 minutes, I think this was the first time I witnessed a queue for one of our gigs. People from all over showed up, which was amazing. I found it a very emotional night, but enjoyed every minute of it. We turned the Lärm gig into a benefit for our dear friend Sara Kirsch, who was fighting leukemia at that time.

(Sarah Kirsch was a staple of the Bay Area punk scene and played guitar in several bands including Fuel, John Henry West, Baader Brains and many more. Seein’ Red toured the US with Kirsch’s band Torches to Rome in the 1990s. Sarah Kirsch passed away from Fanconi Anemia in 2012.)

MRR: I was fortunate to be able to attend that last Lärm show. Your brothers in noise Paul & Olav continued to play without you, in the band Marxbros. Was it difficult to see them continue without you? Did you feel a bit left out or depressed about it?

I enjoyed watching them perform, it was as if I was looking at myself a bit, because Chris Dodge is looking a bit like me (he is less handsome obviously).

MRR: So it was still OK to go to hardcore gigs? (With ear protection, I assume…)

Yes, although it varied a lot and sometimes I had to leave before the last band started to play. It also depended on the venue, some venues have a separate bar and that helps, because you do not have to be in the noise all the time.

MRR: Was it an option to try playing a quieter style of music—whether you had any desire to, or if it was physically possible?

The only option at that time was to play acoustic music. I bought myself an acoustic bass guitar, but it simply did nothing for me. I was not really enjoying it and besides that, I am not a hippie. 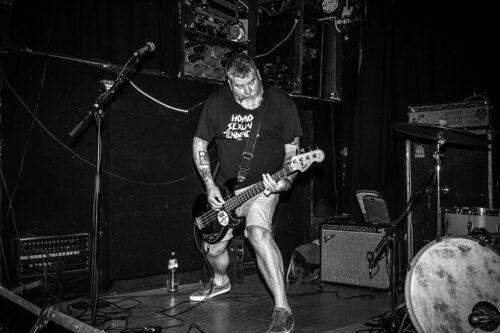 MRR: I understand you are working on a book. Was that a way to stay connected to music without playing it?

Well, the book is something I started about ten years ago and it is a real slow process. I have just finished the H8000 book written by Hans Verbeke and that surely inspired me to continue with my own book again. I am not in a hurry, though.

MRR: Did it affect how you listen to music?

Not really, it just affected the volume actually.

MRR: At what point did you think you’d be able to return to playing hardcore punk?

That must have been after the summer of 2018 after an appointment with the specialist, who was really positive about the improvement of my ears. She told me that if things would continue to improve as they were, there was a good chance of playing music again.

MRR: What was it like the first time you practiced with Paul & Olav again?

That was a great experience. We tuned the guitars (Really?! — MRR), switched on the amps and got the drumkit in order and started the first song (“Dream”) as if we practiced the week before. It was odd, but it also proved that we never lost the feeling of playing together. We compiled a set of about 20 songs that resembled the songs we had done over the years and added a few more in case people wanted us to play more.

MRR: What was your first “reunion” gig, and how many have there been?

The first one was during Static Shock fest in London. It was a huge venue and we were not sure what to expect and therefore we were quite nervous. It went well though and it was a great warming up for the week after when we played Utrecht and Amsterdam. We did not see it as a reunion ourselves, to be honest. We picked up where we left and there was no agenda or pressure. So last year we have played London, Amsterdam (twice), Utrecht, Antwerp, Bremen, Haarlem, Pitfest, Hoogeveen and Groningen.

MRR: Are there plans for more gigs? Records? Any more plans for Lärm gigs? Or a USA tour?

More gigs are already planned and a few weeks ago we recorded four new songs for a split EP with Under Attack from Richmond. We are thinking of doing something with Lärm as well, but nothing is set yet. A USA tour? Well, never say never, but I am not sure if my ears can handle long-haul flights. We do as we please and play the gigs that we think will be fun. But yes, we are back. 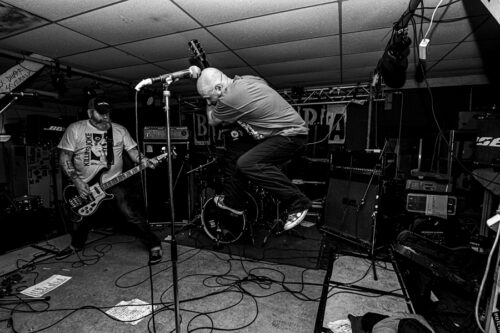 The Seein’ Red/Under Attack split will be co-released by Way Back When and La Familia.