Philadelphia Punks for Black Lives: 19 Notes on a Broken System

Since the uprising began following the killing of George Floyd in Minneapolis, Philadelphia has been reckoning with its own legacy of racism and police brutality. The punk response has been 19 Notes on a Broken System, a digital and cassette benefit by local bands to support the movement and challenge the causes and consequences of injustice and inequity.

The galvanizing moment came June 1. Following 24 hours of rage in which cop cars were burned and property smashed and looted, the protests regained their footing and focus. No matter how many times you quote Martin Luther King saying “a riot is the language if the unheard” most people will still not get the message. People were ready to work in a concerted way.

However, a peaceful march by thousands that day was met with a fierce and unprovoked attack by police. Without warning, police unleashed a barrage of tear gas, pepper spray and rubber bullets on protesters on Interstate 676 and on a street above. They trapped fleeing protesters on an embankment as they kept up their ambush.

Then the police lied. The department made up a story about protesters instigating police violence with projectiles and intimidation. The mayor and police commissioner repeated the lie that night and held to it for three weeks until video evidence presented by The New York Times forced them to recant and apologize.

On June 10, nine days after the police attack—record time for the release of a punk record—the compilation 19 Notes on a Broken System came out on Bandcamp. (A cassette version also sold out the first day and a new one has been issued.)

It is a good representation of different punk styles in Philadelphia. You get the Ramones-y Dark Thoughts and Ramoms. The Brood bring the D-beat. Solarized do their Sci-Fi chaos. There is hardcore from Grey C.E.L.L. and Open City. Erin Incoherent does folk punk. The Ire have a goth vibe. Everyone was pleased that The Dead Milkmen, the biggest punk band to ever come out of Philly wanted in with a new song. Swath Of…, Ungodly Hour, Interloper, Disappearances and Honey also gave previously unreleased music. Crossed Keys, Nightfall, L.M.I., Ritual Earth, and Nothing Wrong round out the mix each with their own brand of defiance.

Proceeds from the album go to groups in the long game against manifestations of systemic racism and injustice.

The Philadelphia Community Bail Fund fights cash bail so that people won’t be imprisoned for being poor and, often, for being African American as well. The Amistad Law Project is a Philly organization of lawyers and activists that helps people escape death by incarceration and prolonged solitary confinement and lately has led on the issue of defunding the police.

Thanks to the benefit compilation and the efforts of others supporting the movement for justice, these two organizations have seen a dramatic increase in funding. So, starting on the Fourth of July, 19 Notes will be raising funds to support the right to life, liberty, and the pursuit of happiness for Black Trans people.

From Independence Day on, proceeds will go to The Black Trans Femmes in the Arts Collective, that, in addition to its mission of Black Trans empowerment, has begun a protesters emergency fund for those that face double discrimination and frequent abuse.

What have we achieved so far? A statue of the often merciless mayor and police commissioner Frank Rizzo is gone. One officer has been charged for an assault during the June 1 attack on protesters. We have a temporary ban on the use of tear gas. An increase in the police budget was cut (largely by moving crossing guards out of the purview of police). The punk comp has given over $2,000 to front-line organizations. That is not enough.

Over 2,000 people have been arrested in Philadelphia during the uprising, including journalists. People are still marching, but major changes are not yet forthcoming. 19 Notes is a start for the punk community of Philadelphia, but there is still work to be done. This is a movement, not a moment, and punks who have been screaming about racism and police brutality for decades will have to do their share.

For more information, contact, and, of course, donations: https://19notes.bandcamp.com/releases 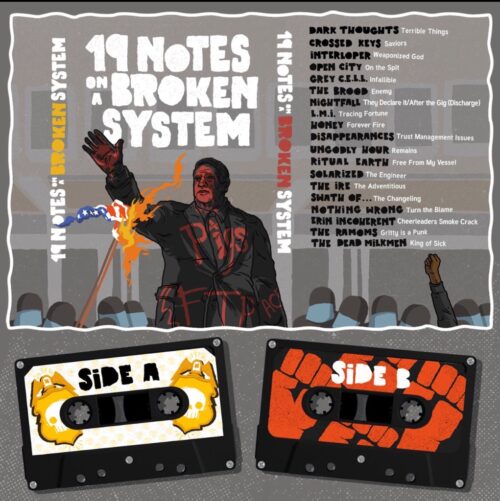