There is Nothing so Whole as a Broken Heart: Mending the World as Jewish Anarchists Edited by Cindy Milstein 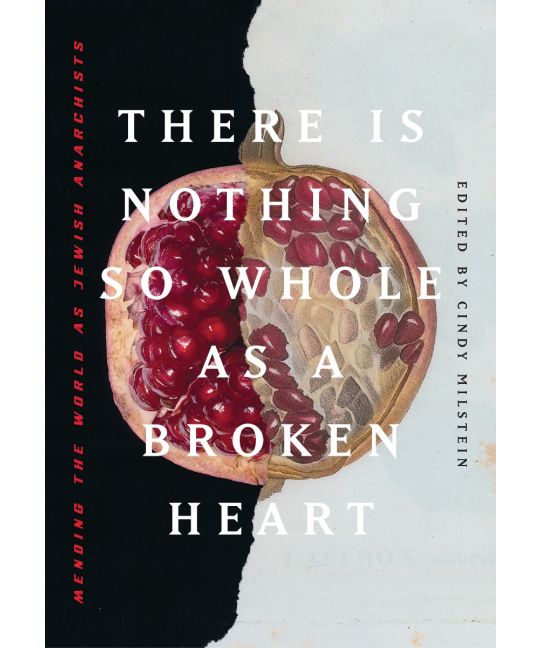 On October 27, 2018, an armed white supremacist entered the Tree of Life synagogue in Pittsburgh, Pennsylvania, proclaimed “All Jews must die!” and proceeded to kill eleven people and injure six others. This event caused many radical Jews, including myself, to rethink their relationship to Judaism and Jewish culture. Suddenly, the threat of fascism and anti-semitism wasn’t historical or theoretical; it was right down the street. To be a Jewish person on that day was a shitty, lonely feeling. I remember crying in the bathroom at my restaurant job, the only Jew on staff, watching couples and families continue to happily eat brunch as though nothing had happened, as if no mass murder had just been committed in our city.

American Jews occupy a precarious position in the United States today. We are considered American until the horrifying moments when we aren’t—until white supremacists in Charlottesville are shouting “Jews will not replace us!,” until swastikas are painted on our cars and on our schools, until our headstones are knocked over and smashed in our graveyards, until the word kike is muttered, until our Chabads are set on fire not once but twice within one week, because someone decided they were not adequately eviscerated the first time.

Anarchist, socialist, communist, leftist, feminist or otherwise radical American Jews occupy an even more dangerous and fraught position. We are forced to contend with the very real threat of anti-semitism (often from within radical communities) while also dealing with rejection from our Jewish families and communities because of our solidarity with the Palestinian people and anti-Zionist views, our queerness, our politics. We are constantly asked to answer for Israel’s government when we believe in neither Israel, nor governments. We carry the weight of centuries of intergenerational trauma and negative stereotypes, including the model minority myth that has most Americans convinced Jews are all wealthy and privileged, obscuring the lives of poor and working class Jews. Those of us who are Jewish and radical often find ourselves being asked to choose between those two identities, with the underlying assumption that they cannot coexist.

In the midst of these painful intersections, There is Nothing So Whole as a Broken Heart: Mending the World as Jewish Anarchist emerges as a powerful offering and testament to survival, solidarity, and the ability to envision and create radical Jewish communities. It is a text for the outcast Jews, the ones you never see portrayed in the media—BIPOC Jews, trans Jews, punk Jews, Jews who know only a smattering of Hebrew or Yiddish, Jews who never had a bar or bat mitzvah, Jews who have been told they are not Jewish enough or too Jewish, who never went on a Birthright trip, Jews with a complicated relationship to their Jewishness. There is Nothing So Whole as a Broken Heart attempts the difficult work of connecting people across diaspora through their resistance to WASP, colonial, patriarchal systems.

Although the contributors come from a variety of backgrounds (not just American—some are also from Canada, Australia, and elsewhere, and not all are explicitly anarchist), there are many common threads throughout the book. These include: empathy for the struggles of other oppressed groups worldwide, police brutality, grief and mourning, the experience of the Shoah (Holocaust), Jewish resistance to fascism, the necessity of ritual, diaspora and the search for a sense of belonging, the use of food and music as tools of revolution, collective organizing, and the reclamation of Jewish creatures like the golem and dybbuk as symbols of transgression. Throughout, there is an insistence that radical Jewish traditions are not in conflict with Judaism, but rather continuing ideals communicated in the Torah. Resistance, mischievousness, and struggle have always been a part of the Jewish mindset. One of the greatest accomplishments of There is Nothing So Whole as a Broken Heart is that it situates modern Jewish radicals within a lineage of Jewish radicalism, from Yiddish anarchist anthems like “Daloy Polizei! (Down with the Police!)” to Jewish folktales about women who dared to refuse the demands of kings.

Standout pieces in the book include Ami Weintraub’s “How to Scream, How to Sing,” about their experience working at the Tree of Life prior to the October 2018 shooting and starting the collective RAYJ (Rebellious Anarchist Young Jews) which sets the tone of the anthology, and Cindy Milstein’s heart-wrenching essay with the deceptively benign title, “Anti-Semitism Hurts,” which details Milstein’s encounters with anti-semitism both in anarchist circles and as a Jew living in the Midwest. These incidents culminate with Milstein’s German swimming partner casually uttering the phrase, “It’s hot as a gas chamber in here,” in reference to the swimming pool, then trying to defend herself by saying it’s a commonly used phrase in Germany. In the end, Milstein concludes that the issue is not really that anti-semitism offends Jews, but that the mindset behind it is linked to the literal deaths of Jewish people. Almost every piece in the anthology speaks to legacies of trauma and suffering, which I suspect is why Milstein wisely breaks the text up with sections of art, allowing readers time to digest what they’ve read. And the art is no afterthought here—the woodcuts, collages, and comics are stunning and could easily make up a book by themselves.

My favorite section was entitled “Resistance as Repair,” and gives examples of Jews engaged in activism that combines their anarchism and Judaism in thoughtful and creative ways. Examples include: a Jewish drag troupe, a Jewish anarchist radio station, a volunteer taharah collective (taharah refers to the Jewish ritual purification of the dead, and this was an amazing reflection on the treatment and care of the deceased), and the creation of a radical Jewish calendar that rejects Christianity’s time structure. We hear from countless voices of anarchist Jews doing meaningful work in their communities, working with Jews and non-Jews alike to build a better future. In the face of so much hatred, these stories offer tangible hope.

There is Nothing So Whole as a Broken Heart would have benefited from the perspectives of more BIPOC, Sephardic, and Mizrahi Jews, and more writing about Jewish culture’s relationship to whiteness in general. Perhaps this is as good a reason as any for a second anthology. There is much more to be said about the convergences of Jewish tradition and radical liberationist thought. But I am grateful to Cindy Milstein, AK Press, and all the contributors to this anthology for starting such an essential conversation.