From the Vaults (literally!): CONVULSIONS vs. Satan’s Slaves

Thanks to Phil of Bradford, UK’s CONVULSIONS for sending in the great story below, along with 9 songs for us to enjoy! “Electro Convulsive Therapy” and “Hatred Controls,” along with three other studio tracks and four live numbers. Phil talked down the quality of the live tunes, but personally I think they are fkkn brilliant, especially as delivered by a crew of 16 year olds who hadn’t the slightest clue what they were doing! CONVULSIONS are truly one of my favorite unsung ’80s UK bands. —Robert

On Saturday 14th May, the Subhumans had played a gig at the Palm Cove Club in Bradford with The Instigators also on the bill. During the evening it was announced that there would be a second gig the following evening to help the Subhumans pay for some repair work to their van. As we were in the crowd, we approached the promoter, Nick Toczek, and blagged our way onto the bill, which was now Subhumans, Instigators, and Convulsions. Venue for the gig: The Vaults Bar. Shit!!!!

Bradford was, and still is, home to a motorcycle gang called the Satan’s Slaves. These guys are full patch-wearing 1%er outlaw bikers in the same vein as the Hell’s Angels, Mongols, Bandidos etc. They are an organised club with full members, prospects, hangers on, and all the rest of the outlaw biker trappings, with violence being high on the agenda. Very heavy dudes. The headquarters of the club was… The Vaults Bar!!

You could walk past this place (if you were dumb enough) any night of the week and pass rows of choppers parked on the pavement, with the odd prospect standing guard outside, glaring at anyone who dared look their way. It was a definite no-go area. To attempt to put on a punk gig there was a total no brainer, but fuck it, we were on the same bill as our heroes the Subhumans.

So we arrive at the venue early — around 6:30 to load our gear in before the Satan’s Slaves arrive. First job was to move all the tables and chairs from in front of the stage to make a dance floor for the punks to enjoy the music. Bad move, we found out later, as there is a definite hierarchy within the Slaves. Big cheeses have their own tables in front of the stage. Not tonight fellas. So, we set up the amps and drums; PA guy arrives and sets up. Subhumans and Instigators arrive and wonder why we look nervous. I don’t remember how much we told them, as they weren’t from our town so we probably took the “ignorance is bliss” approach. Around 7:30 the Slaves begin to arrive with their leader at the front. He was a mean looking dude called “Les C” (left out his full name) with a shaved head and a hook where his right hand once was (!—web ed.). I guess the other bands were beginning to realise that these guys weren’t here for the music, and they’re not happy with the rearranged seating. We decide to get up and play, as we were first on the bill. First few songs went down okay with the (very) few punters (fools?) who’d braved the venue, although the Slaves seemed unimpressed as they glared out of the shadows… Tune number five in the set: “System’s Slaves,” with the chorus, “We don’t wanna be systems slaves.” Stan decides to change the chorus to “We don’t wanna be Satan’s Slaves” without telling anyone. I remember giving him a sort of “Oh, fuck” glance and then ducking out of the way of the first of many beer bottles to come flying our way. I think we did pretty well, and none of us actually suffered a direct hit, although we were showered with broken glass. We raced through the rest of the set and jumped off stage to mingle in with the punters. You have to realise that the bikers were all in their 20’s, 30’s and 40’s. We were all 16, so we can be excused for our non-confrontational (cowardly) behaviour?

Next up: Instigators. Not many upfront of the stage (can’t blame them), followed by Subhumans. Think a few of us braved the pit for the Subhumans (our heroes) set.

Anyway, the end of the night approaches and word goes around that the Slaves are waiting outside and are gonna kick our asses. We decided to go down in style, so about 20 of us who were left got into a bunch and armed with guitars, amps and drums for weapons charged out making a lot of noise straight into an armed gang of… nobody!! The bikers had simply roared off into the night, much to our relief.

We had many run-ins over the years with trendies, football fans, and lesser gangs of bikers, but this was the most memorable. Being a punk in the UK in the ’80s made you Public Enemy Number 1 to all the dickheads in town.

Thanks again, Phil! Here are the track he sent in, and you can read and hear more, including Convulsions’ Electro Convulsive Therapy demo, at Terminal Escape. 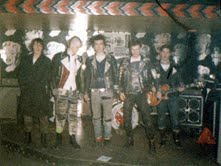