Record of the Week: Aye Nako The Blackest Eye EP 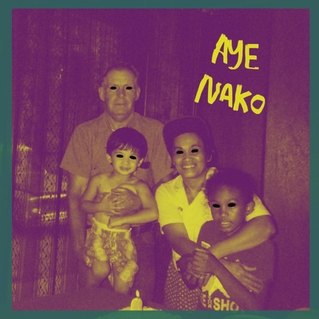 Brooklyn’s AYE NAKO are back with their first release since their 2013 debut LP Unleash Yourself. I know that the band wanted to change their sound after that LP in an attempt to distance themselves from the “pop punk” label and even went as far as talking about releasing a hardcore EP. (I’d love to hear that since “Good Grief” from their demo is still one of my favorite songs of theirs). Instead of hardcore, they went in a completely different direction and delivered a lush, dense, guitar heavy, indie-shitstorm (that’s good) that recalls some of the melodic sensibilities of the best SUPERCHUNK stuff and the guitar noodle-ry (that’s a word) of TED LEO. I don’t use these band names to imply that they’re using these well-worn roadways as a blueprint. I use them as a signifier that AYE NAKO knows their history, they know what the fuck they’re doing and they build on those who have come before them to create their own new beast that is theirs to tame (or not tame) as they see fit. The whole presentation feels like a step up from the band’s previous record, which was no slouch but had moments that felt rushed or not quite fully-realized. There’s no wasted space here. The lyrics dig deep into thoughts on sexual abuse, race, the quagmire of eternal self-doubt, the fucking total-realness of never-ending white supremacy and the insidious ways that it continues to sustain itself. In a music scene that cannot stop focusing on white skin and cis-gender bodies, this record is unapologetically queer, defiant and brown. Plus, it has a lot of sweet hooks. All of these things are important. All of these things are good. I can’t wait to hear what they create next. (Greg Harvester)
(Don Giovanni)