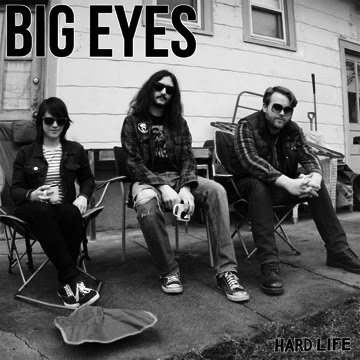 BIG EYES falls somewhere between the MUFFS and the REPLACEMENTS, with really cool, tough girl vocals and of course there’s an invocation of the RAMONES. The sound on this LP is incredible, almost too perfect; it sounds like what you want the cool girl band to sound like in ’80s subculture movies, but they always end up with some shitty synth puffpastries. This is tough punk rock. City street rock, the sound of trash strewn sidewalks, dogs tied up to chain link fences, feathered hair with leather jackets, a packet of Lucky Strikes and beat up Chucks. It’s totally the more rock end of punk, and it’s so easy to go into really gross territory when you are in those waters — you know, shitty rawkin’ Sunset Strip bar rock cheese chowder. This is somehow badass though. The band is so tight and the songs are so cohesive and tough sounding, hooks in all the right places, melancholy and mean rather than posturing and limp. So catchy it’s relentless! I feel so cheesy writing this review, but it’s the band you wish the girl from Freaks and Geeks had formed after watching that terrible CREAM cover band her friends were in. Kate’s voice is sick, somewhere between Joan Jett, Kim Shattuck and Paula Pierce… She invokes Joey Ramone and that’s just dreamy. Anyway, I was not expecting to like this record at all, but I am convinced! (Don Giovanni Records)