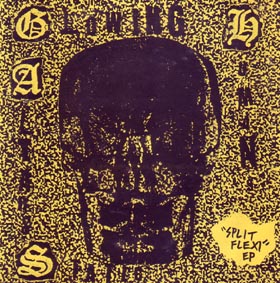 GASH sends shivers down my spine in the same way GISM has the power to do so. It’s visceral, it’s violent, and it feels good. “Power Fucker” is the strongest track out of the GASH tracks. Live, GASH has some bloodshed and vivisection videos that can render some faint hearted watchers uncomfortable. This is a band that pushes limits in the way GISM did, and does it with excellence. Shares members with another solid Boston ripper, ASPECTS OF WAR. The CLEANSING WAVE track is just as strong as their demo earlier this year and still reminds me of MORPHEME with the sickest drumming. This is a beautifully done flexi release that is not just a novelty but a must-own record that captures the raw punk brutality of what is coming out of the Northeast right now. The cut and paste on this flexi still smells of glue. Instructions on flexi say to “play loud and throw away” — punk is meant for destruction and chaos. Get this or don’t. P.S. The blood on my test press had not oxidized when it was received.
(Total Fucker)