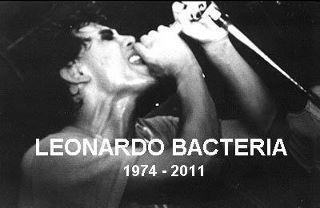 On Sunday Nov. 20th the Peruvian underground movement suffered a big loss. Outsider artist Leonardo “Bacteria” was found dead at his home. He was known for such acts as MDA, InsumisiÁ³n, and PestaÁ±a. He was also known around town for running a small label, Ya Estas Ya Producciones, and his wild antics for which he was loved and hated. He partied so hard at one point that one afternoon he was woken up on the front lawn of a random home somewhere… completely naked.

One of his first projects was a noisecore act called MDA.

He was truly making “noise not real music” and was always at the vanguard. Although he was a big fan of hardcore punk, he was never satisfied playing it in its traditional styles.

His second main project was InsumisiÁ³n. He had a guy in the band whose job was to break stuff on stage. One of the guitarists was from Dios Hastio.

0:20 He samples Daniel F. from Leusemia from a famous live recording.
0:37 Los Crudos

Later on he started an electro-pop band called PestaÁ±a which achieved some success and was able to tour South America and play in Argentina. He helped launch Adrivainilla’s musical career with this band.

He was a dear friend of mine.
—Mark ReÁ¡tegui