From the Vaults: Uncool Slamming 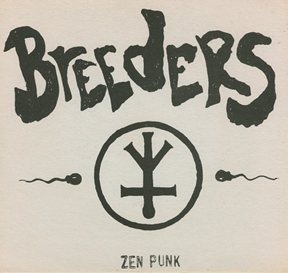 I first heard of the Breeders (not the ex-Pixies band) on some website where their Zen Punk EP was compared to fellow Midwest bands Mecht Mensch and the State. Wow! That’s one way to get my attention quick. The record was one of the first I made a point of checking out the first time I visited the MRR record library. Now, I definitely wouldn’t say it lived up to the “hype” (if you could call it such), but it’s nevertheless a cool li’l 7″ and still pretty obscure.

There are two things I like about this EP. The first is how the two sides are so different — the A-side track, “Future Amnesia,” is sorta in between post-punk and “quirky” new wave. Amusingly, when the record was reviewed in the magazine (Issue #17, see below), this song was compared to Loverboy! Ha. I guess… but I still kinda like it, if only for the fact that it’s so incongruous to the other two songs. I dunno, maybe that’s what most of their other songs sounded like?

The other thing I like about this three-track EP is that one of the songs is called “Fuckheads (Uncool Slamming).” I mean, what more can you say about that? 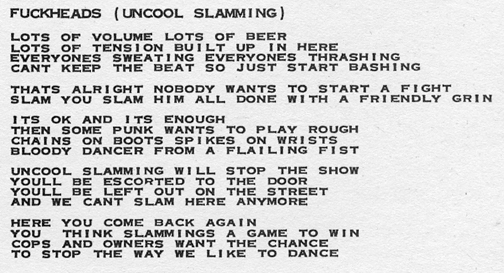 Now, aren’t you curious what it sounds like? Well, listen for yourself: